JVV publishes a science monthly Vidyarthi Chekumuki, in Telugu, for school children. JVV has been conducting “Chekumuki Science Sambaraalu -a science fest” since 1994 in order to inculcate interest in science and scientific temper among the students. Given that the traditional examination system is inadequate as regards arousing scientific curiosity in children, JVV has designed this activity in a manner so as to test and promote the innate curiosity in children. Many academicians and academic institutions have appreciated our efforts and have constantly supported and encouraged us. This science fest is designed at four levels. In the 1st stage at school level, 8th, 9th and 10th class students are quizzed on subjects like physics, chemistry, biology and math’s which are relevant to the fundamental science concepts which the students face in their daily life. for example:- (A)What is the gas used to preserve ‘KURKURE’ the eatable item? (B)The formula of Plaster of Paris used (unwisely) to make large sized Vinayaka’s Idols is? CaSO4 2H2 O / CaSO4 1/2H2 O / CuSO4 2H2 O / Na2 CO3 (C)Which of the leaf ingredients of itchy plant does cause the itching sensation? (D)What is the reason for the shine of polished shoes? Reflection improved/Refraction improved/Polarization increased/Internal reflection achieved In such a way the school team is selected comprising of one student each from 8th.9th and 10th class for the mandal level science fest. In Second stage at mandal level, besides this questionnaire, J.V.V conducts cultural programs like stories, songs which are relevant to science. In addition to that an elocution competition will be conducted on scientist’s contribution to the society. Four best teams will be selected for the district level science fest.

District level science fest is a two days program. Apart from all above programs, the students show their talent through the project works reflecting the problems being faced by the society and the solutions given by the science. JVV conducts cultural activities like play lets, songs, drawings, group discussions which are based on the health, environment and science, National and International current affairs on science. Under “Meet The Scientist” program students get a chance to interact with eminent scientists. State level science fest is a three day program where students showcase their talents in project works, group discussions, cultural programs and literary events. In addition, a study tour will be conducted. From mandal level onwards students participate in the science fest as a team, which inculcates a sense of co-operation and collective action in children. This science fest is JVV’s humble effort to instil team spirit, self confidence and a quest on science among the students which are essential to mould today’s students into next generation scientists who can propel our Nation into a developed country.

This “Chekumuki Science Sambaraalu” attracts a large student participation every year since its inception and about 4.4 lakh students took part in 2017, which was conducted in 5000 schools in 500 mandals across the State. This year we expect about 4.5 lakh students to participate in this activity. 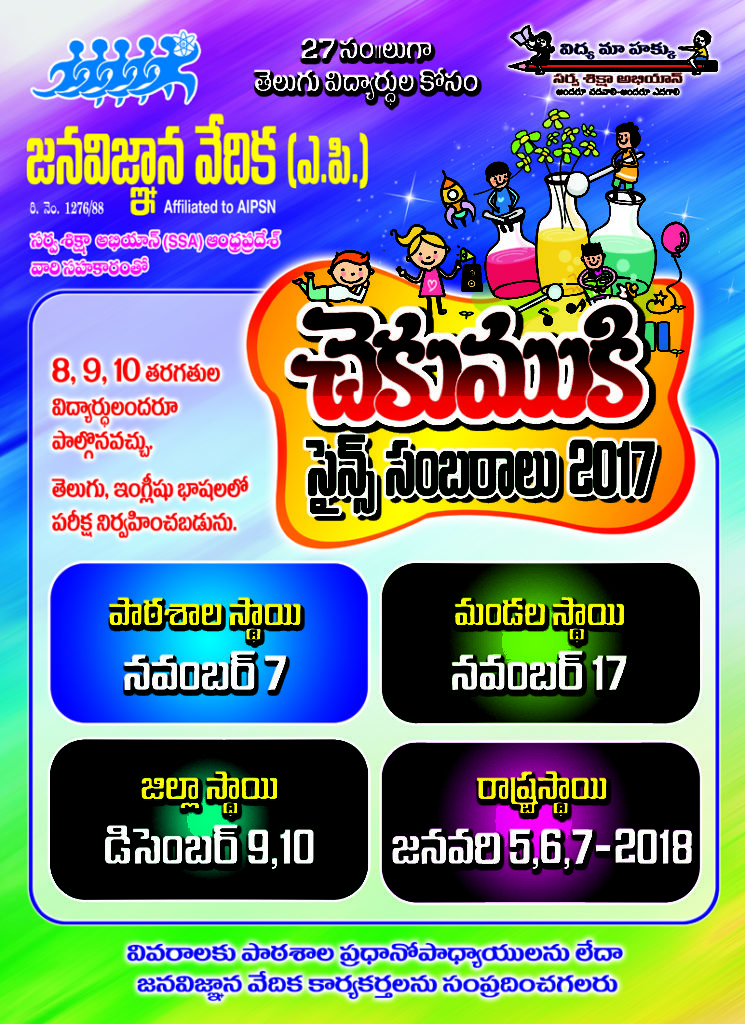